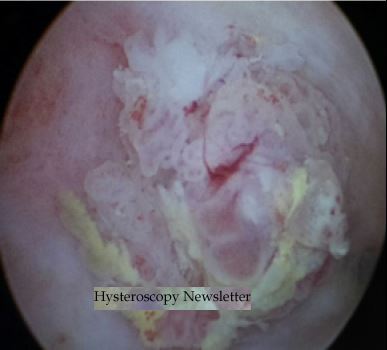 Mixed Malignant Mullerian Tumors (MMMT) is biphasic neoplasms with endometrial epithelial and stromal components which are both malignant. The etiology is uncertain, although several immunohistochemical studies, based on changes in the p53 protein and staining with vimentin, cytokeratin, epithelial membrane antigen and other markers, support the theory of a common origin for both components from a single cell clone.

Macroscopically, they present as uterine masses generally friable and with a polypoid appearance, which usually arise at the bottom of the cavity or on one of the horns, usually progressing to extend to the cervix and into the vagina.

The average age of onset is 65 years, and similar to endometrial adenocarcinoma, hypertension, obesity and diabetes are frequently associated, but their causal role is not defined. The most common clinical manifestation is postmenopausal bleeding