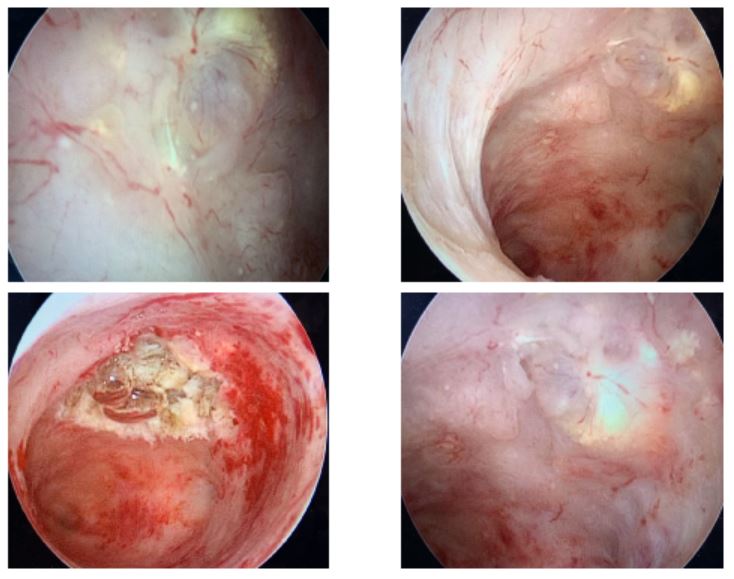 The number of UTROSCTs described in the literature has not reached 100 cases, and the lack of specific clinical presentation and pathognomonic findings on imaging studies makes it difficult to identify.

A polyphenotypic immunophenotype is a characteristic feature of UTROSCT, and may be helpful in diagnosis and in exclusion of other lesions. Although the poor data available from current literature, the presence of sex cord-like elements shows the low-malignant potential of the tumour in most of cases; however, metastasizing and recurrent cases occur. UTROSCT is generally treated with hysterectomy (with or without bilateral salpingooophorectomy), but no established surgical treatment protocol exists.

We present a case of uterine tumour with sex-cord-like differentiation, which has been diagnosed by hysteroscopic biopsy and successfully treated with laparoscopic hysterectomy with bilateral salpingo-oopherectomy.

The woman underwent a hysteroscopy using Bettocchi continuousflow operating hysteroscope (KARL STORZ, Germany), with a diameter of 5 mm and a 5-Fr operating channel, that revealed an endometrial suspicious area on the anterior wall, measuring 1,5 cm, with an irregular yellow-coloured surface (Fig. 1); the presence of a diffuse hypervascularization both with the areas of necrosis (Fig. 2, 3) was suggestive for malignancy and a grasp biopsy was performed.

The microscopic examination of the tissue revealed stretched and branched endometrial glands, surrounded by cells with abundant and foamy cytoplasm; these findings suggested the suspicion of sex-cord like elements. According with the pathologist, a hysteroscopic second look was performed, in order to sampling more deep tissue

Again we used Bettocchi 5mm hysteroscope with 5-Fr Twizzle VersapointTM electrode to completely resect the suspicious area (Fig. 4). Immunohistochemical studies were performed and
the tissue was found to be diffusely positive for calretinin and inhibin, focally positive for CD99 and negative for CD10; according to the Immunohistochemical phenotype suggestive for the sex cord component, the tumour was diagnosed as UTROSCT. The staging of disease revealed neither locoregional spread nor distant metastases. A totally laparoscopic hysterectomy with bilateral salpingo-oopherectomy was performed and the final histological diagnosis was UTROSCT.

The UTROSCTs are often discovered only accidentally after a hysterectomy performed for uterine fibromatosis, because of the lack of specific clinical characteristics and pathognomonic findings on imaging studies. Preoperative differential diagnosis from other tumors can be difficult, but is important for the surgeon and the pathologist to recognize and differentiate it from other lesions. In our case, however, diagnostic hysteroscopy using target biopsy worked as a successful diagnostic tool to make a correct diagnosis.