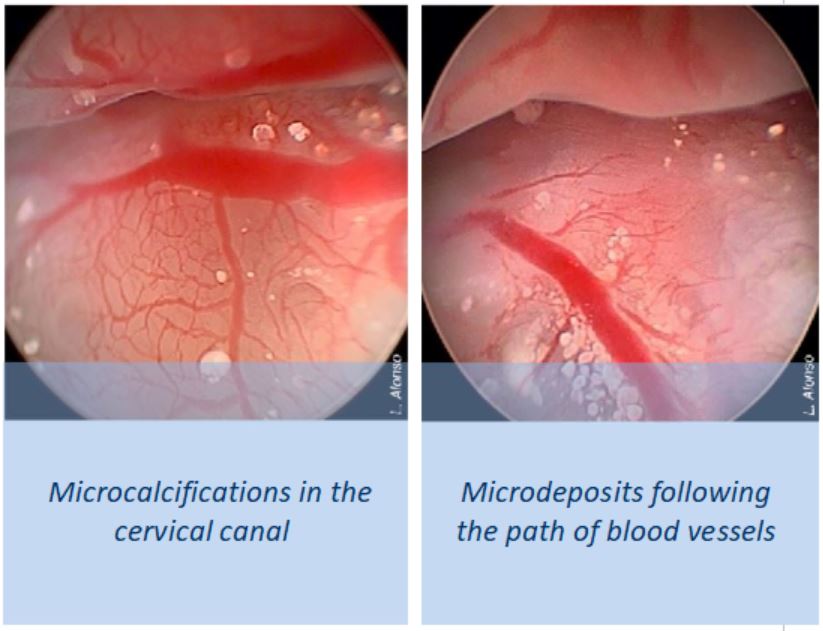 It is not uncommon to find in the daily practice small hyperechogenic areas located at the level of the cervical canal when performing a pelvic ultrasound, that are seen as well-defined white spots that persist over time. The presence of microcalcifications in the cervical canal is the most frequent cause of this ultrasound finding, hyperechogenic foci seem to be more an incidental finding than an indicator of pathology. When visualized at the time of hysteroscopy, it appears as whitish areas in the cervical canal, that can be a single isolated image or a group of multiple areas that sometimes follow the path of blood vessels.

There are very few published studies looking at intracervical hyperechogenic foci. In a very interesting work published on endometrial and endocervical calcium micro-deposits (Duffield, C., et al. (2005). “Endometrial and endocervical micro echogenic foci: sonographic appearance with clinical and histologic correlation.” J Ultrasound Med 24 (5): 583-590.) It was reported that the vast majority of patients had used hormones or IUD, had undergone interventions such as uterine curettage, spontaneous or therapeutic abortions and cesarean sections or had had an infection.