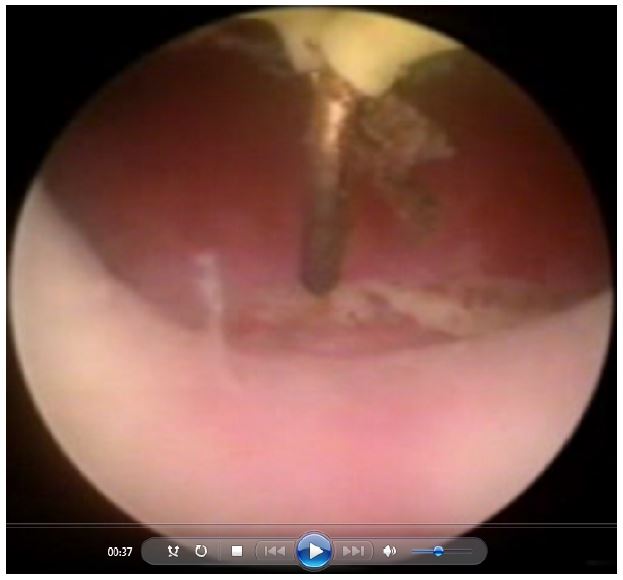 The fibroid pseudocapsule is composed of a rich neurovascular network in neurofibers similar to the neurovascular bundle surrounding the prostate. In the larger fibroids, after being withdrawn completely from the uterine wall, they are morcellated. In the surgical technique of abdominal myomectomy the myoma is not fragmented before removed from the uterine wall, it is always taken whole, mobilizing the nodule through the pseudocapsule. In this two surgical techniques, the myoma is fragmented after myomectomy, only to be retired of pelvis cavity.

In 1978, Neuwirth held the first hysteroscopic myomectomy using urological resectoscope with applying surgical technique similar to the resection of the prostate, with a resectoscope and “U” loop, slicing the fibroid and, sometimes, damaging the adjacent myometrium. The slicing technique fibroid, gold standard technique, leads
to severe exposure lump vessels, causing greater blood loss, through strain absorption and sometimes myometrium damage with consequences for reproduction.

This technique, with the resectoscope with “L” loop (Collins), initiates with the incision of the myoma bed, surrounding it completely. From there, we enter the fibroid plan / pseudocapsule and releasing the fibrous bands, with occasional clotting of the vessels found. The vascular network generally surrounds the myoma, detachment of the myoma occurring inside the pseudocapsule should cause less bleeding and maintain the integrity
myometrial, Allowing the facilitation of uterine healing and is of benefit for future reproductive outcome. The first incision should always be done through the posterior portion, completely surrounding the endometrium until you reach the pseudocapsule. When reaching pseudocapsule starts the mobilizations of the nodule, with blunt dissection of the myomapseudocapsule from adjacent myometrium, without cutting the nodule.

Only after the complete withdrawal of it we make sliced in the longitudinal direction and then, taken from the uterine cavity with grasping. In some larger fibroids, we make the myoma fragmentation before the complete liberation of the myometrium, because there is not enough space to mobilize the nodule in the uterine cavity.

The direct mobilization technique myoma prevents damage to adjacent myometrial and minimizes the risk of overload of the procedure. Moreover, during the mobilization of the fibroid, more intramural portion of the nodule is pushed by the myometrium to the uterine cavity, increasing the myometrium thickness and the distance of the fibroid to serosa, allowing the approach of fibroids with distances smaller than 5 mm to serosa safely.
The direct mobilization of the myoma is possible at the ambulatory surgery, doing the same movement with scissor around de pseudocapsule.

0 comments on “Why use pseudocapsules of myoma in hysteroscopic myomectomy?”