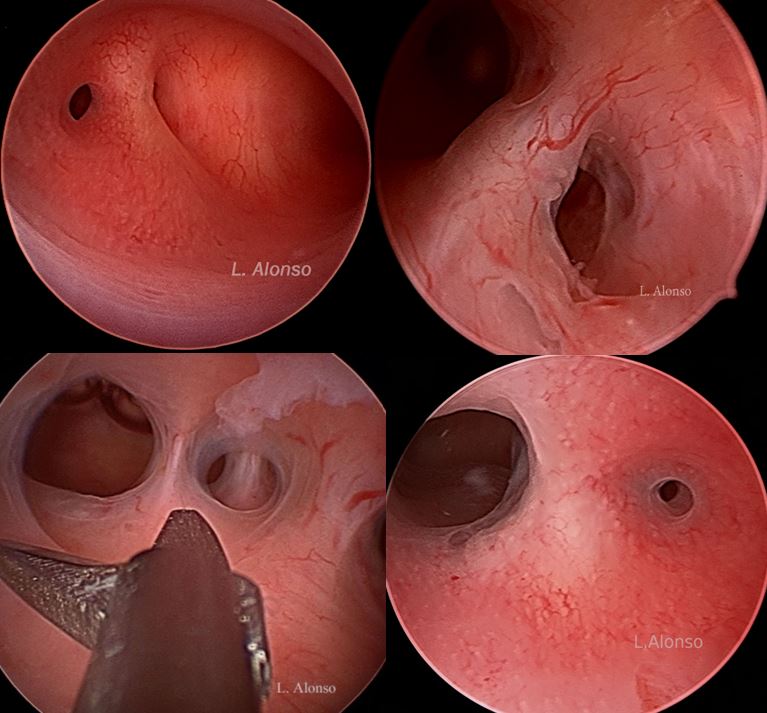 Intrauterine adhesions are bands of fibrous tissue that occur inside the endometrial cavity frequently in response to endometrial injury. The severity of this condition can range from thin strings of filmy tissue to complete obliteration of the cavity with subsequent amenorrhea and infertility among other clinical devastating consequences. Clinical challenges include primary prevention of adhesions and prevention of recurrent adhesions after surgical treatment. In this chapter, will provide an overview of the ethiopathogenesis of intrauterine adhesions.

The most common cause of Asherman Syndrome is trauma to the endometrium. This can be the result of a dilation and curettage (D&C) for spontaneous abortion or termination of pregnancy, a molar pregnancy, or a curettage in the postpartum period. Due to this knowledge, the rate of medical abortions to avoid surgical manipulation has risen in some parts of the world (1) . In a study of 1856 cases examined by Schenker and Maralioth, pregnancy was the predominant risk factor, and 66.7% of Asherman cases occurred after post-abortion/miscarriage curettage, 21.5% after postpartum curettage, 2% after cesarean section (2), and .6% after evacuation of hydatiform mole (3). Rare cases of IUAs have been seen in c-sections even after the use of B-lynch procedure in the event of postpartum hemorrhage.

It remains unknown why pregnancy has a high risk of Asherman’s. One of the theories is the low estrogen status of the patient before and after the procedure does not allow for adequate growth and stimulation of the endometrium (4).

Another possible reason for the higher risk brought by pregnancy is that the uterus may be in a more vulnerable state after pregnancy, thus causing the basal layer of the endometrium to be more easily damaged by trauma (4). This is supported by the observation that a large percentage of patients with Asherman report prior instrumentation after pregnancy. Studies show that the risk of adhesion development is higher when the procedure is performed in the 2nd thru fourth postpartum weeks (21.5-40%), and the risk is actually lower if endometrial manipulation is performed within 48 hours (2). One of the theories of increased adhesion formation in post-abortion D&Cs is that the placental remnants can encourage fibroblastic activity and collagen formation, causing adhesions before the endometrium can regenerate (3).

Patients who are not pregnant may also experience Asherman syndrome due to manipulation of the uterus or endometrium. As reported by Yu et al, Asherman Syndrome was seen after diagnostic curettage (1.3%), hysteroscopic resection of uterine septum (6.7%),hysteroscopic myomectomy (31-45%), abdominal myomectomy, insertion of IUD (.2%), and even after uterine artery embolization (1).

Infection has also been proposed as a cause of Asherman’s syndrome. The method by which infection can cause this is still hotly debated. In a report of 171 patients who underwent cesarean section, 28 developed endometritis; however, post-operative hysterosalpingogram (HSG) demonstrated no difference in intrauterine adhesions between the endometritis group and the rest of the group (4).

Despite being a rare etiology in the United States, genital tuberculosis has been identified as a more common and concerning cause of IUAs in developing countries such as India. In these patients, the uterine cavity is totally obliterated, and the endometrium is destroyed. These patients go on to experience amenorrhea and infertility (4). The damage caused by genital TB is so severe that attempts to repair the endometrial cavity are often futile (2).

Along with the above causes, another possible cause or risk factor for Asherman’s is congenital anomalies of the uterus, specifically a septate uterus (4). No studies have been done to determine whether the anomaly was the cause of Asherman’s. It is thought that the uterine anomaly places the patient at risk for multiple hysteroscopic procedures, thus placing the patient at higher risk of developing adhesions (4). Lastly, reports of Asherman’s syndrome after pelvic radiation have also been reported (5).

After trauma or the above mentioned causes of Asherman occur, the basal layer of the endometrium is damaged and becomes fibrosed, and the stroma is exchanged for fibrous tissue (5). Unfortunately, the molecular mechanisms regulating the pathogenesis of adhesions is not known at this time (4).

Changes at the cellular level occur, with the endometrium transforming to an inactive cubo-columnar epithelial layer (4). The distinction between the basal layer and the functional layer becomes nonexistent, and there is no longer a differentiation between the functional and basal layer of the endometrium as the functional layer is replaced by an inactive avascular layer in which fibrous synechiae forms across the cavity. The fibrotic synechiae disrupt the entire cavity, and on relook hysteroscopy, stromal calcifications and ossification are seen (2). The new fibrous layer of tissue is not responsive to hormone stimulation (4). The fibrous adhesions exhibit dense connective tissue and demonstrate no endometrial lining in comparison to the surrounding endometrium.

At the histological level, when full-thickness myometrial biopsies were taken, it was found that the uterine wall was 50-80% fibrous tissue in comparison to 13-20% of control subjects (4). In addition, Asherman’s has also been noted with deep adenomyosis (1). With such a large amount of the endometrium being replaced by fibrous adhesions, it is thought that the myometrial activity is thus decreased, and the perfusion of hormones is inhibited as well.

Common cytokines known to be involved in the pathogenesis of adhesions include TGF-β, TNF-, IL-1, and IL-18 . Their exact role is yet to be determined. In a study by Wang et al, it was noted that NF-kB was significantly elevated in the endometrium of patients with Asherman’s. NF-kB is a transcription factor that promotes the expression of IUA inflammatory markers and is seen as a major component of inflammatory disease (7). More studies are planned by this group to further determine the possible clinical role of NF-kB

Another possible cause for the pathogenesis of adhesions includes the cytokines b-fibroblast growth factor, platelet derived growth factor and transforming growth factor type 1 (6). Further work must be done to confirm their role in Asherman’s as well.

Lastly, it has been hypothesized that there is a genetic component in the formation of IUAs, however, there is scant evidence of what genetic factors may be involved (6). Moving forward, several studies will be performed so that a better understanding of Asherman’s is obtained, which may help physicians with treatment and prevention of this devastating pathology.

0 comments on “Etiopathogenesis of Asherman’s Syndrome”